Is It Really the Thought That Counts? – Bruce Atchison 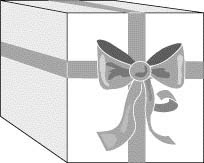 We're taught from childhood that it's not the size of the gift but the charity behind it that matters. This is true in theory but it isn't always practiced in the real world. People tend to judge by the size and value of the gift, even if they're too polite to say so.

When I attended Jericho Hill School for the Deaf and Blind, I only received fifty cents a week for my allowance. This made gift giving difficult because, even in 1968, that amount of money couldn't buy much. From Deliverance From Jericho (Six Years in a Blind School), here is how I solved this dilemma.

When December eventually arrived, Mrs. Rogers introduced us to the class Christmas present concept. Each student took a slip of paper from a box and gave a gift to whoever's name was written on it. I drew Steve's name. What good present could I, with only fifty cents a week, buy for him? Having to give gifts seemed degrading to me.

On one trip to the toy store, I spotted a pocket knife. It was affordable and was an item Steve might appreciate. After paying for it, I realized that the present would look very unimpressive, even wrapped up nicely. Then I had a brilliant idea. I searched the classroom for paper to wrap the knife in. After making a suitably large ball, I placed it on a sheet of Christmas wrap and sealed it with tape.

At the end of one class, Mrs. Rogers distributed the gifts. I watched as Steve removed the colourful wrapping, only to find grey paper underneath. He removed that layer and found white paper towels.

After a few minutes of unwrapping the present, Steve triumphantly held up the penknife. His desk was completely covered in litter. "Thanks for the knife. Thanks for all the paper too," he joked. I felt relieved that Steve appreciated what I gave him, even if it did seem puny.

Deliverance from Jericho contains many more vignettes of what life was like in that government-run institution. These range from poignant experiences of homesickness to hilarious incidents of mischief.

Click here to read more about this book and to order it.

You may also e-mail me directly for more information.