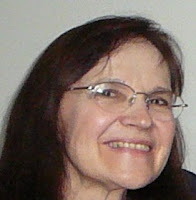 A few years ago, I accepted an assignment to write the story of John Bunyan for a kids’ take-home paper. Weeks of research ensued and then the writing (and rewriting) of the piece. Finally I submitted the story and it was published in Guide in 2003.

However, as often happens, the research I did alerted me to many interesting side stories. One of the most fascinating was a series of incidents which involved John Bunyan’s second wife, Elizabeth. John Bunyan tells the story himself here .

More as a writing exercise than anything, I decided to try to recreate that story as a piece of fiction. "Powerful Defender" is that effort. I have tried to keep the story as close as possible to the facts Mr. Bunyan reports, although I did invent a few characters (Jack and Martha Bludgett, for example). The story is in four parts with Part 1 below, reprinted from my blog where it was published in 2005. 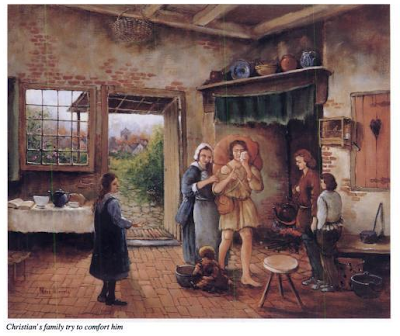 POWERFUL DEFENDER - a story of Elizabeth Bunyan (Part 1)
Elizabeth dropped another lump of peat into the stove and pulled her chair close to its warmth. The winter cold was quickly consuming their fuel. But this should be the last time she’d need to feed the fire tonight. For soon John would be safe at home and she cozy in bed next to him.

She sat down, took up again the tiny garment she was knitting and examined it. To think that in a few months, her own baby would wear it. She put one hand gently over her swollen stomach and savored the joy of the last months. Who would have dreamed, not two years ago, that the popular, outgoing, fiery but gentle preacher, John Bunyan, would choose her, shy, quiet Elizabeth, to be his wife and the step-mother to his four children? And now she was carrying his child!

Elizabeth took up her knitting again. Only the sound of clicking needles and an occasional muffled crackle from the five broke the stillness.

It was November 1660. England had been through decades of upheaval – civil war, a king, Charles I, beheaded, his heir, Charles II, exiled to France, then a ten-year trial-and-error parliament under Oliver Cromwell.

Growing up in the town of Bedford, Elizabeth had paid little attention to national politics, though they had affected her through her church. For as long as she could remember, things had been up-and-down for their dissenting congregation, the Baptist Church at Elstow. There had been disagreements between parish authorities and their pastor about things like using the Book of Common Prayer, adult baptism, even whether he should be allowed to preach. Thankfully under Cromwell’s parliament, the rules had relaxed.

As Elizabeth’s needles flashed back and forth, her mind went to her first memories of John. She had first seen him about eight years earlier when he, his wife and their four children began coming to her church. She’d admired him right from the beginning – for his tender care of his family, especially little blind Mary, for his wisdom as a deacon and, in the past few years, his passionate, piercing sermons. When he preached, you felt he could look right into your very heart.

Then came 1658. She recalled the news of Cromwell dying, rumors that a group of loyalists in London was trying to bring back the king, discussions of what would become of dissenters now. But what was vivid to Elizabeth from that year was the memory of the death of John’s wife.

How sad he had looked. Her heart had ached for him and the children and she’d wished she could do something for them. But she’d kept her feelings to herself. Over the months that followed, however, she became aware that John was noticing her.

The courtship was short but when John asked Elizabeth to marry him, there was no hesitation on her part. She knew that being his wife and mothering his children was a big job but she wanted no other. They had married in 1659 and in the months that followed, her esteem for him had only grown.

She especially admired his zeal as a Christian. He was so inspired by his love for God and compassion for unsaved countrymen that many a night, after working all day as a tinker, he’d walk miles to neighboring towns or to homes in the countryside to share his faith with many or few. It was just such an invitation that had taken him to Samsell this night.

He should be home by now, though, Elizabeth realized as she put down her work and strained to hear his footsteps. But the only sounds were the sighing of the wind and the bark of a dog. What was taking him so long?

His recent words came to her: Since the king has been returned, they are clamping down on our meetings. One of these days I’ll be arrested.

In her imagination she saw a constable grab him by the collar, cuff his hands, drive him to prison with a club. She gave herself a shake. This would never do. After all, it was a long walk from Samsell back home to Bedford.

She got up and checked the stove. There were only glowing embers. She’d best go to bed.

When she finally got to sleep, she slept fitfully. She had a dream about John and awoke feeling terrified. Sleepily she reached for him but when he wasn’t there she was instantly wide awake. Something had happened to him!

Mid-morning the next day, the three youngest children crowded around Elizabeth as she answered a knock on the door. Jack Bludgett from their church stood outside.

"Bad news, I’m afraid," he said to Elizabeth. "Thy John’s been arrested."

"Why? By whom?" Elizabeth felt the room spin around her. She put little Joseph down and grasped the door frame.

"It’s Justice Wingate," he explained. "It seems he’s had his eye on John’s meetings for a while now. They sent a constable with a warrant after John last night. He was taken just as the meeting got underway."

Elizabeth felt like she would be sick. She hung onto the doorframe as a cramp gripped her stomach.

Jack caught her just as she was about to crumple onto the floor and carried her to a bed. Far away she heard him explain to Mary, "Thy Ma has fainted. Can thee take care of the little ones till my Martha comes?’
Continued...
Copyright 2005 by Violet Nesdoly