Of Self Lives and Other Mysterious Things. By Marcia Lee Laycock 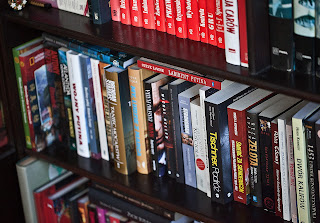 Image by Bronislaw Zrozka from Pixabay.com

What is the shelf life of a book? For some it goes on and on. The Bible, for instance, is still a best seller, with approximately 5 billion sold since publication of The King James Version in 1611. The best selling novel of all time is Don Quixote by Miguel De Cervantes, published in 1612, with 500 million books sold. Next is A Tale of Two Cities by Charles Dickens (1859) with 200 million sold.

For others, however -- and most fall into this category – the shelf life is short.

I wondered if my first novel, One Smooth Stone had run its course as I filled out a purchase order for the book recently. I knew mine were likely the only orders being filled by my publisher now, thirteen years since its launch. I sighed. One Smooth Stone had moved the hearts of readers – from a psychologist working in a local prison who told me the book helped her help others, to a young victim of rape whose faith in God was restored.

So I prayed that God might extend its shelf life and continue to do His good work through it.

Then I happened to read a blog post about audio-books. It was mentioned that someone I knew had started creating them. I emailed him and after settling on the parameters we began the process. He worked chapter by chapter, sending the mp3 file to me when it was done. I listened and read along, noting any changes needed. A few times he contacted me to ask permission to change something in the text. He even pointed out there was a minor thread left dangling in the book. We tied it up neatly and carried on.

It felt like new life had been breathed into the novel. When it was completed I could not contain my delight to see it listed in the audio-books on Amazon. God still had a plan for One Smooth Stone.

In this digital age, we writers need to be open to new methods of getting our words out there. I became aware of this when I sat in the office of the personnel director of Wycliffe Bible Translators’ centre in Papua New Guinea. When I told him I was a writer, he said, “Oh, we’ve been praying for you! We need someone in the Non-Print Media department.” I frowned. “Uhm, non-print? But I just said I’m a writer.”

I was soon assigned to write short radio scripts, stories about what God was doing through Wycliffe all over the country. The vignettes were edited to ensure cultural clarity, then translated into several languages and sent to Guam to be broadcast throughout the South Pacific. The reach of my words had never been greater. After that I was asked to write the script for a video outlining Wycliffe’s 40 years of work in PNG. That was another adventure all together!

Being a writer in this century means being able to adapt creatively. The good news is “… we are His workmanship, created in Christ Jesus for good works, which God prepared beforehand that we should walk in them.” (Ephesians 2:10, NKJV).

Home Words is a newsletter that will bring updates, personal news and a short devotional to your inbox each month. Receive one of my most read short stories when you subscribe :)

For more information about my writing and speaking ministry, visit my website