The Cradle and the Cross by Lynn Dove 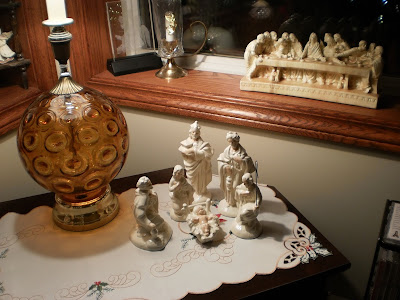 One of my most favorite hymns is “Christmas Has Its Cradle, Easter Has Its Cross” by Rae E. Whitney.  Although probably sung most often at Christmas than at Easter, I think it is a hymn that is equally appropriate for both celebrations.  The two most important celebrations in Christian history are inseparably linked together, all part of God’s perfect plan to redeem the world.

My sister-in-law gave us a beautiful nativity scene over forty years ago.  Every Christmas, I display the little scene prominently, so that it is the centre of attention amongst all the other decorations of the Christmas season.  When my daughter was only two years old, she watched with wide-eyed fascination as I carefully set out the little figures and I asked her to name each one.
"Who are these three men with gifts in their hands?"  I asked her.
"Oh, those are the three wise men!"  She proudly stated.
"Who is this man?"  I pointed to another figure.
"That's Joseph!"
"Who is the Baby?"
"Baby Jesus!" she proudly shouted.
"And who is the lady beside Baby Jesus?"
Without hesitation she exclaimed, "That's Mary Christmas!"

I still can't help but giggle whenever I recall that precious memory.

My aunt gave me a ceramic depiction of The Last Supper many, many years ago.  It is one of my most cherished possessions for a couple of reasons.  Every time I look at it, I think of my sweet, little aunt, Eja, and how excited she was to give this to me as a gift.  She was my Godmother, and she was affectionally called "Gudmor", Danish for godmother.  She had a simple, honest, uncomplicated faith and I loved her like my own mother.  She passed away in 2003, and I miss her every day.  The depiction of The Last Supper is displayed all year round on a window ledge in my living room, and when I look at it, the Words of Christ come to me immediately, "Do this in remembrance of me."

Jesus was with His closest friends the night before He was crucified, and He was trying to explain to them through the breaking of bread together during the Passover, that He would become the once and for all Sacrifice for the entire world.  They didn't understand the symbolism of the bread and wine until Jesus had ascended to His Father, but the act of taking Communion or The Lord's Supper has become one of the sacred ordinances within the Christian church.

At Christmas, I display the Nativity Scene close to The Lord's Supper scene.  My kids didn't take note of this "tradition" and why I insisted the two displays be in such close proximity to one another until my daughter learned to play "Christmas Has Its Cradle, Easter Has Its Cross" on the piano.  As she played the song, she got the connection right away.  The Cradle and the Cross are inseparable.  The Birth and Death of Jesus ordained by God the Father to redeem the world.  "For God so loved the world that he gave his one and only Son, that whoever believes in him shall not perish but have eternal life."  John 3:16

Merry Christmas, Fellow InScribers, and many happy returns in the New Year!

Lynn Dove is the award-winning author, of the YA “Wounded Trilogy”- a contemporary Christian fiction series with coming-of-age themes.  A wife, mom, grandmother, and free-lance writer with articles published in several magazines and anthologies including Chicken Soup for the Soul books, her blog, “Journey Thoughts” is a Canadian Christian Writing Award winner.  Readers may connect with her on Facebook, Twitter, and at lynndove.com