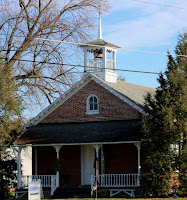 When we made our way into the restored one-room schoolhouse, we had no idea what joy would unfold there. We slid onto a side bench overlooking the rows of inkwell desks where countless children had slumped between the hard iron and wooden chairs. Mother squeezed my hand and pointed toward the schedule of entertainers noted in the program we had received as we entered.

“I know him, I worked with his mother. He’s giving the New Year’s blessing. And this group, they are the singers that came to our church when Daddy was still alive.”

Later I would relate this day to my friends, “We shared a day with mother at an historic Pennsylvania Dutch Farm, it can only be described as a gift from the Lord.”

As we sat and listened to the speaker closing his presentation, mother asked me to walk over to see what book he had been promoting. Turns out it featured scripts from a 1930s and 1940s radio show that had been popular in the Lehigh and Berks County area.  I bought a copy since each page printed the scripts in Pennsylvania Dutch with English translations lined up next to them. This would give me an opportunity to learn key phrases in the language that my Dad always feared would fade away from use. I bought a copy of the book and brought it to show mother before the next performance. She hugged the book as if I had given her a treasure and laughed with exclamations of recognition as she paged through it.

“We would hurry home from church on Sundays so we could listen to this radio show!  Look I never knew the speakers were two men, they spoke like a husband and wife! It’s all here! The shows we laughed at as we sat at our kitchen table. Look at that, I never pictured them like that, but there they are!”

Soon we heard pounding at the windows and banging at the doors.  A Pennsylvania Dutch version of Santa Claus, Belsnickel, appeared at the back of the classroom demanding to know if those in attendance had been naughty or nice.  Mother recounted her memories of her uncle dressing up to be a Belsnickel and scaring the cousins on Christmas Eve.

“He would pound on the wooden siding and we would run and hide as fast as we could.  He always carried a big stick.  But he never came inside, he only pounded on the house to scare us.”

The Belsnickel at this performance obviously was a hunter since he was dressed in animal skins complete with antlers upon his head.  Mother whispered to me, “Our Belsnickel never looked like that. But he did give us a good scare!”

The New Year’s Blessing presentation included some familiar Pennsylvania Dutch songs that mother happily joined in to sing and clap along to the music.  But the most beautiful time unfolded as the closing music trio performed. 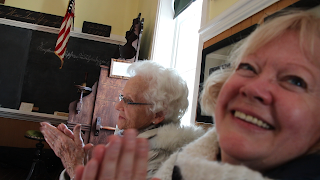 To the accompaniment of a banjo, a bass and a fiddle we sang in unison to several Christmas Carols and finally to Silent Night.  We didn’t have candles in our hands as we traditionally had during Christmas Eve services.  But we held each other’s hand and let the tears run down our faces as we lifted our hearts together to sing this beautiful Christmas song, thinking of many Christmases past and all the loved ones who had sung this song with us.

I had chosen to come home to visit mother over the timeframe that encompassed the anniversary of my Dad’s birthday, his stroke and finally his death.  This Pennsylvania Dutch Christmas celebration at the Kutztown University Pennsylvania German Cultural Heritage Center happened to fall on the last Saturday of my stay.

Later as we sat outdoors in the open barnyard, mother reached over again and clasped my hand.

“Thank you for this beautiful day,” she said.  “Daddy would have enjoyed this too!” 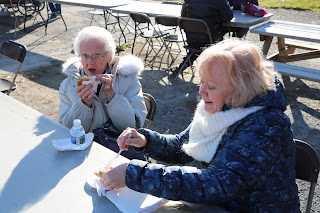 With that my husband appeared to serve us our simple lunch from the barn refreshment stand: hot dogs with sauerkraut and a gooey piece of Shoofly pie. I hadn’t known what would transpire at this small celebration in a corner of our Pennsylvania Dutch area. It provided in wondrous ways, Christmas memories that will forever come to mind as I sing Silent Night.

On the way home we drove up the winding roads to New Jerusalem to her childhood church and to the cemetery in which her family is buried.  We paid our respects at the Geisinger, Miller and Hertzog sites. Finally, we pulled into the small town where I grew up. We had brought the Christmas decoration for Dad’s grave, so we made a final stop at Solomon’s Church cemetery grounds.  The shortened day of December welcomed the moon coming to settle over us as we walked to the gravesite.

In the distance Macungie mountain rose up, resolute in its reminder of strength and solace to my little town. The chimes from the bell tower atop my old schoolhouse on Main street rang out the hour and the tune carried down to Church street to where we stood.  Mother reached for my hand and again we shared the tears brought forth by Silent Night memories only we knew. 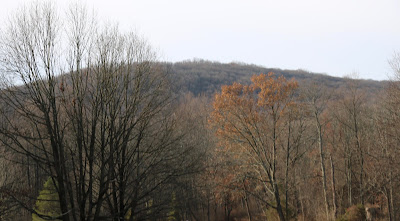