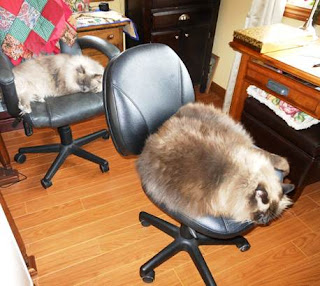 I've inherited a helper, two helpers actually, but only one of them likes to help me type.

When our daughter moved house a few years ago, she asked us to take care of her two cats, Angus and Alex, for two weeks.

Little did I know when I agreed to let these two creatures into my home that they would tug on my heart strings, but they did; tugged enough so that when Heather said she needed to find a new home for them, I agreed to keep them.

The two cats have made themselves quite at home in the last three years. No, worse than that, they've taken over my home and during the day when I'm in my office, their favourite resting spot is on my desk. More than once I have to move a cat tail when I want to type in order to find the keys. Some days, like today when I'm experiencing an attack of writer's block, I don't mind if 23 pounds of cat sits on my keyboard. Moving his furry presence with its pleading blue eyes gives me a perfect excuse to procrastinate.

Why am I procrastinating? Because the words haven’t come easily during the past year. I could blame it on a number of circumstances…illness in the family but that wouldn't be the whole story. Whatever the reason is for the words to be blocked, written words aren't the only ones that have dried up. If I'm honest, I hit a wall in my prayer life this week.

I have prayed the same prayer for several years now, prayed daily for God to take care of people I care about but because I couldn't see the answers, this week I almost gave up. I wanted to say, "God are you having hearing problems? Are you tired? You don't seem to be paying attention to my prayer. If you were, you'd have fixed that problem by now."

So for a while I’ve allowed the cat to use my computer for his pillow. I’ve despaired that the words are locked away, that I couldn't write and I couldn't pray.

Today, I read in my Bible where Gideon, a top notch soldier whose story has been passed down for many generations through the words in the book of Judges, also went through a period when he entertained doubts and wondered if God was hearing his prayer. He asked, "If the Lord is with us (me), why has all this happened to us (me)?"

I read on, interested to learn how such a man changed from questioning to becoming a man of faith, a man whose life story is worthy enough to be included in the Bible. I learned Gideon had gone through trying times. He and his people were in slavery for seven years. Then God called Gideon to set his people free. Freedom was a prayer that had been on Gideon's lips for many years but when God answered his prayer Gideon could hardly believe what he was hearing. He expressed his doubts to God and asked for a sign that his prayers had been heard. God didn't cast him aside because he needed his doubts squashed. Patiently, lovingly, God used a series of miracles to teach Gideon he was talking to a God who could be trusted.

When I finished reading Gideon's story, the writer's block that had crept across my fingers and stopped the words from flowing disappeared. So as I push Angus away from my keyboard, I'd like to leave you with this thought.

This week God has reminded me that answers take time; sometimes seven years, sometimes more, but God does hear our prayer and the answers will come.