Recently I ate breakfast at The Fisherman’s Boot in Steveston, British Columbia.  As the title implies local fishermen frequent this eatery, not because it features great selections of fish, but it offers the basics, nothing fancy but everything necessary, the boot if you will.  The menu features a hearty breakfast complete with coffee, toast, 3 eggs, potatoes and a choice of bacon, sausage or ham all for a mere five dollars.  Wooden reindeer peer over the seating area oblivious that their season has come and gone, proudly showcasing silk bouquets of spring flowers.  Multi-purposeful decorations that highlight the idea that this place doesn’t pander to holiday housecleaning, in fact it doesn’t even update the bench covers in its booths.  However an array of overstuffed sandwiches awaits the customer who wants to buy lunch for his fishing trip, any of them look like they would stave off a hungry stomach through a long days’ work of pulling in the catch.  Over in the corner a bookshelf of well-worn paperbacks offers a free companion for whomever chooses to peruse through the titles.

Looking around at the varied customers I noted that a table of older women looked more like a book club than a group of fisherwomen.  In fact the Boot has become known as a place where locals can socialize in a pared-down atmosphere, while eating a meal of tried and true selections. Probably the most innovative items in the place were the three flavoured crèmes by the help-yourself coffee canisters.

At any rate, the Boot represents to me an often known but sometimes ignored truth about writing.  Often we offer the same choices on our word menus but how we present them to our audience determines who stops for a while to enjoy them.

Who are we writing for? Do we often consider the audience or do we find the audience after we have written an inspired piece?  Both approaches happen in the course of writing, however we as writers need to focus on the needs of our audience. We need to spend some time getting to know our customers to understand what they truly want.  Sometimes it might require some honest conversation between two characters, simple, direct, straight to the point.  In some situations we might need to pare down our writing and offer “just the boot” to draw in the readers that truly need to hear our intended message.

Mind you this idea came to me the other morning as I groggily pulled on my boots after a spring snowfall greeted me on my return to Calgary.  My little dog, Dusty didn’t know that I was still on Vancouver time; he needed to go do his morning duty.  Halfway down the driveway to retrieve the newspaper, I realized that my feet bent awkwardly as I walked.  In my rush I had put my boots on the wrong feet.  I thought about where I had been the day before, and I mulled around the idea… sometimes we need to make sure we have “just the boot” that fits. 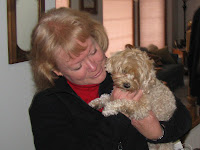