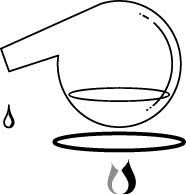 Evolution is now the default belief system in public schools throughout western countries. This places pupils of faith in an awkward position. Should they answer test questions as if they believed the textbook or should they stay true to the Bible and risk receiving a bad mark?

One church friend gave me a clever answer to this quandary in 1974. From my upcoming How I was Razed memoir, here is a valuable reply which satisfies the faith convictions of students as well as the needs of teachers.

I faced a dilemma when I returned to science class that January. Like millions of public school students, teachers taught me that the theory of evolution was the only reasonable explanation for the origin of the universe. "What can I do about this?" I asked Sister E one Wednesday evening as we sipped coffee in her kitchen after the meeting. "I like science but I hate that Evolution junk."

"I know how you feel," she said as she set her cup on the table. "When I was going to school, I had a lot of difficulty with science. I didn't want to write that this or that was true. Brother H told me I should say 'scientists believe that...' or 'the book says...' when I answer test questions."

"Wow! I'll have to remember that. That's so cool. You mean I could just say, 'According to the theory, this happened,' or something like that?"

"Sure. You wouldn't be lying or betraying Jesus. All you're doing is telling them what you had learned."

"That's brilliant," I smiled. "Thanks for telling me that. I'll do that the next time I write a test."

How I Was Razed is the testimony of the way I was mislead by a cult church, how I turned my back on God after I felt he perennially failed to heal my eyes, and how he graciously brought me to my senses.

My previous books, When a Man Loves a Rabbit (Learning and Living With Bunnies) and Deliverance From Jericho (Six Years in a Blind School), are now available online by clicking here or by clicking here to e-mail me directly.