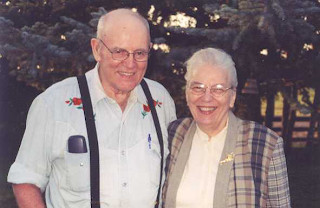 Reflecting on the year we have just left behind, we can say with thanksgiving, “Jesus led us all the way.” There were both joyful experiences and sobering ones. My husband, Eilif, continues to battle with Multiple Myeloma, a cancer of the bone marrow. When he could no longer tolerate the treatments, his oncologist said, “There is nothing more we can do for you.” Eilif’s response was, “But there is still God.”
Despite that prognosis, he carried on, though spending more and more time in his lift chair. Just days before Christmas, he woke one morning unable to lift himself off the bed. He fell to the floor and the next day tests showed that the cancer is increasing and his hemoglobin very low. He was given two units of blood with no positive effect.
Our family gathered for our Christmas celebration in the social room in the complex where we live. Although Eilif was not up to leaving the apartment, the family visited him a few at a time and before dispersing, everyone crowded into the apartment to sing Silent Night and pray with him.
Since then we have been introduced to Soursop, a fruit grown in tropical countries. According to reports on Internet, it is a natural cancer fighter, much more effective than chemotherapy and with no side effects. He is using that, but this is too soon to know if it is effective.
In the past year, both my sister, Anna, and her husband, John, have left this earth for their heavenly home. Both in their nineties, John was growing weak in both body and mind, and Anna suffered extreme pain from a major stroke and several falls as a result. Both were living in anticipation of going to be with Jesus.
For those of us who remain, parting naturally brings a feeling of loneliness and sadness, but as the Bible promises, “We sorrow not as others who have no hope.” We know because Jesus came 2,000 years ago to bring salvation, we can anticipate a glorious reunion in Heaven some day.
What a day that will be when we meet again in Heaven and with all those who have accepted Christ’s offer of eternal life, we can sing praises to the One who came to earth for our sakes, those many centuries ago. That is what Christmas is all about. And that is what gives us joy in all circumstances.


Goal Met
We are rejoicing in one goal attained in 2010. I have finished my novel, Echo Valley, and expect it to come off the presses at Word Alive Press in two or three months. Eilif has been a real encouragement in getting this done so I owe a lot of the credit to him and all of our family for standing by us. If you would like to put in a request for a copy at a special price before it is released, you can contact me by email.
My next project is to compile in a series of booklets of the devotionals I have written over the years with some revision to make them relevant to today.
May you experience a joy filled and victorious 2011.
Martha Toews Anderson