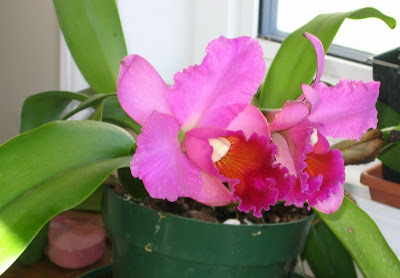 This beautiful cattleya orchid came into bloom yesterday. Its blossom is the climax of a very long story.

Twenty-four years ago my daughter was given several varieties of orchids for a school project. They were all in bloom when they came into our home and several of the others have continued to blossom over the years. This one was quite stubborn, and refused to produce another flower, until this fall.

My daughter grew up and moved away from home, but I continued to nurture her plants. No matter how carefully I cared for his one there was no reward. I assumed that it was my fault. I must have been doing something wrong. I was just not good at caring for cattleya orchids! After ten or twelve years, it would have been easy to become discouraged and consign this one to the compost bin. If that had been my choice, I never would have been blessed to see this wonder of God's creation.

Sometimes it seems that the practice of prayer can be rather like watching over an obstinate plant. There are several things that I have brought to my Father, over the years, with no visible result. I could become discouraged and conclude that I'm praying wrong, or that God isn't interested in my requests. One of the things I have prayed about, for years, is my writing and the difficulty of publication. It would be easy to give up and stop praying. Still, the ways of God are as hard to understand as the puzzles in horticulture. My task is to continue to work, pray and trust in the Lord of the eventual result. His schedule is obscure, but it is faultless. His answers come in His time, and are perfect.