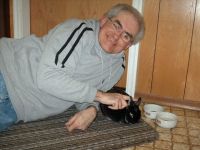 I'm sure we all agree that the real meaning of Easter has been buried under chocolate bunnies and marsh mellow chicks. Even so, I've learned much from having rabbits living in my home. Instead of keeping them in lonely backyard hutches, they lived with me and received as much care and attention as I could pay each one.

Bunnies are timid creatures but they enjoy the company of those whom they trust. That's why winning the friendship of a rabbit is precious. Just as wounded souls need to learn to trust Christians again, so rabbits need to learn that they're safe with us.

Tenderness is one requirement of us all in Christ. As 2 Timothy 2:24-26 (Bible in Basic English) admonishes, "For it is not right for the Lord's servant to make trouble, but he is to be gentle to all, ready in teaching, putting up with wrong, Gently guiding those who go against the teaching; if by chance God may give them a change of heart and true knowledge, And so they may get themselves free from the net of the Evil One, being made the prisoners of the Lord's servant, for the purpose of God." 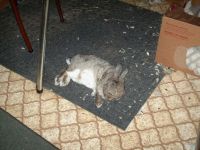 Unlike dogs and cats, rabbits misunderstand chastisement. To them they think they're being attacked.

When we correct wayward believers, we must consider 1 Thessalonians 2:7   and 8 (BBE). It shows how we need to be easy on each other. "But we were gentle among you, like a woman caring for her little ones: Even so, being full of loving desire for you, we took delight in giving you not only God's good news, but even our lives, because you were dear to us."

I also learned over the years to relate to bunnies on their terms rather than forcing myself on them. For example, I would lie on the floor rather than grabbing them and putting them on my lap. Every rabbit I had came to trust me and to associate that posture with being petted. Some bunnies even hopped over to me when I began to lie down. 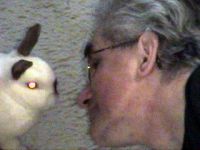 What a wonder it is that Christ also became one of us. He could have come as a consuming fire but he became the Lamb of God for our transgressions. When he comes again, he'll be the judge who will punish wickedness and dispense blessings to his children.