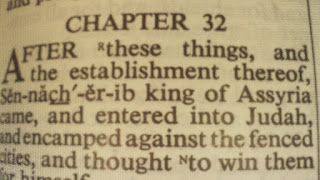 How should we read the Bible? It sounds like a ridiculous question, yet it needs to be asked. Why? Because many Christians have never been taught how to properly read it for all its worth.

The Bible contains several genres of literature. The historical books, such as Exodus, 1 and 2 Kings, and Acts, are straight-forward narratives. These are relatively easy for us to understand.

The wisdom literature, such as Proverbs and Ecclesiastes, teach general truths that we can apply to our lives. They aren't exactly promises but applying the principles of wisdom usually bring us good results.

The Psalms are the poetry section of the Bible. They were originally sung but they can be read without losing the beauty of the words. Some of them, such as Psalm 22, are prophetic. Crucifixion hadn't even been invented when it was written, yet it describes Christ's torment in graphic detail. This is also likely why he quoted the first verse while he was being crucified.

Scripture contains many prophetic books. These seem puzzling to those who lack the knowledge of the times in which they were written. Yet the fulfilled prophesies in these books help prove the divine nature of the Bible as being from God and not merely of human origin.

The letters in the New Testament are the instruction manuals for the early church. Though we can learn much from the spiritual principles, matters such as dress and meat offered to idols no longer have the importance they once did.

The most puzzling genre in Scripture is the apocryphal books. Because many Bible teachers today neglect the fact that the readership of those books was the people to whom they were sent, all sorts of bizarre doctrines have been invented to explain passages within them. As The Bible Answer Man host, Hank Hanegraaff has said many times, "The Bible was written for us, not to us."

We Christians would be well served by studying the ancient cultures of the Middle East. By doing so, all of us would gain a deeper understanding of the types and shadows in the Old Testament Jesus Christ and the apostles made frequent references to passages which their audience or readership knew well. This is why it's crucial to study the Bible in its historical and cultural context.

Scripture should not be used as a dictionary. Instead of considering the context of verses, various cults and ignorant persons isolate verses that appear to prove their ideas. Then they build whole doctrines around them, as Peter wrote in 2 Peter 3:16. Keeping the context in mind will always result in a better understanding of what the Holy Spirit spoke through the prophets and apostles.