TO CHEW ON: “Therefore we also, since we are surrounded by so great a cloud of witnesses, let us lay aside every weight, and the sin which so easily ensnares us, and let us run with endurance the race that is set before us, looking unto Jesus, the author and finisher of our faith, who for the joy that was set before Him endured the cross, despising the shame, and has sat down at the right hand of the throne of God.” Hebrews 12:1-2
There is something inspiring about watching athletes win a medal – especially when those athletes are from your country and you know a bit about what it took for them to get there.

Canadian speed skater Cindy Klassen is one such inspiring person. Always a gifted skater, she was rejected for the Olympic women’s hockey team before she even tried speed skating. Once she put on those speed skates she began winning medals including a bronze in the 2002 Olympics. Then in a freak accident in 2005 she cut twelve tendons, a nerve and artery in her arm and was forced to take time off. But she bounced back, winning five medals at the 2006 Winter Olympics in Turin. However, in February of 2008 she again cut her season short to be by her sister’s side after Lisa Klassen suffered a near-fatal traffic accident. And later that year she had surgery on both her knees. Yet in December 2009, she qualified yet again to represent Canada in speed skating at the 2010 Olympics. Her story tells us something about the power of a goal and the strength of the human spirit when it comes to reaching that goal. 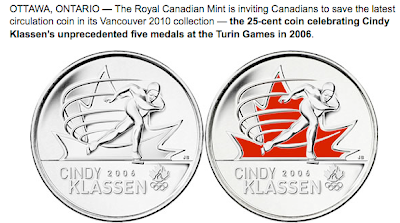 These elements also come into play in the race that is the Christian life. The ultimate goal for the Christian, as we said yesterday, is to hear Jesus’ “Well done!” when we break the finish-line tape. But the race is long, the obstacles many. That’s where we need determination, endurance, perseverance. Our inspiration and example is Jesus. I love how the Amplified Bible describes His role:

“Looking away from all that will distract to Jesus, Who is the Leader and Source of our faith, (giving the first incentive for our belief) and is also its Finisher (bringing it to maturity and perfection)” Hebrews 12:2 Amplified

The writer speaks of how Jesus’ finish (enduring the cross, despising the shame, seated at God’s right hand) inspires us. I also get inspiration from how He ran the middle of the race – His compassion, His single-mindedness, His wisdom, His ability to capture truth in little stories, His plain speech, His eye for the individual, and on and on… What a winner!

PRAYER: Dear Jesus, thank You for coming to earth to run this earthly race over 2000 years ago. Remind me to look to You for inspiration about how to carry on every day – and to finish well. Amen.

MORE: Find out more about Cindy Klassen at her web site.