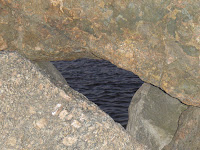 A co-worker continually enters my office for a brief chat about life, family issues, health concerns etc. He has had brain surgery several years ago, and suffers from seizures periodically. He’s been having complications due to differing medical prescriptions that doctors prescribe to get the seizures under control. What’s so amazingly funny is that each visit there is a different bruise located somewhere on his body.

On one occasion he had a fall and he came in my office with a bruised eye, a large lump on his head and a badly scraped knee. I asked what happened and he replied, “Oh I had a seizure and just fell while walking down the street.” Another day he came in and his eye was badly bruised and his glasses were all scratched up. I faced him and laughed because he was so nonchalant about it. He had taken another fall.

This scene repeated itself over and over in my office. It was as though he was preparing for a spot in a movie and each time getting more make-up on for a crash scene. Even though Jimmy was seriously ill, he appeared to be healthy and strong. Without a doubt he had strong faith. Among our conversations was a discussion about his faith in God. Even if he were to die sitting in my office chair he said that he was ready to go and he showed no fear. His confidence in God’s promises was reassuring.

Suddenly, I was taken away from the sight of the bruises and bumps and scrapes, I saw a man who was as steady as a rock. According to the Bible, this rock is Jesus.

Jesus is referred to many names in the Bible. In Isaiah 26:4, he is named the “Rock Eternal” The verse reads: “Trust in the Lord forever, for the Lord, the Lord, is the rock eternal.”

He promises life abundantly, peace and security in the midst of trouble, and a secured place in heaven if the decision is made to follow Him and trust Him and believe his promises. We are held up by His mighty power and He is the rock of all ages.

Psalm 139: 7 – 10 David says: “Where can I go from your Spirit? Where can I flee from your presence? If I go up to the heavens you are there; if I make my bed in the depths you are there; If I ride on the wings of dawn, if I settle on the far side of the sea, even there your hand will guide me fast.”

Yes, He is worthy of our praise, faith and love and expectations of answered prayers. The Bible says to be thankful in all circumstances of life. Who feels like praising God when we find ourselves in the heavy trials of life? Very few perhaps but our faith allows us to trust no matter what the circumstances are and since Jesus promised that he will never leave us or forsake us, we can learn to rely on Him for strength and guidance. We learn to trust and acquire faith; we learn to lean on the solid rock!

May we all learn to place our trust in Him in all circumstances of life!