Me - at six months 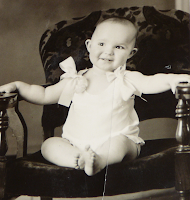 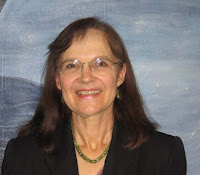 I've been thinking for the last little while about getting old, about writing and aging, about aging writers and writers aging...

My thoughts along this line were focused by an interesting piece on the Novel Matters blog called "Have You Been Gray Listed?" That day I also read Deborah Gyapong's musings along similar lines.

Though growing old as a writer isn't talked about much, it's probably a bigger concern to many of us than our silence would indicate. There are certainly enough of us, judging by all the gray heads in photos of most writing conferences and events.

At the end of this month is the third anniversary of my mom's death. Shortly after she died I felt the need to find out all I could about death - the natural end of aging. I found Sherwin B. Nuland's How We Die both interesting and thought-provoking. Here, for another little take on aging, are some thoughts spurred by a passage from the book.

On reading How We Die

“...whether it is the anarchy of disturbed biochemistry or the direct result of its opposite – a carefully orchestrated genetic ride to death – we die of old age because we have been worn and torn and programmed to cave in.” Sherwin B. Nuland in How We Die

Suddenly the pain in my toe
and the intermittent twinge
from my sciatic nerve
are more sinister than a mere
squeak in the brakes.
Sputter of forgotten
names, hesitation
while I search
for the right word,
stall mid-
sentence may indicate
there really is a problem with my computer,
though my burgeoning girth would say
gas mileage is improving
which, they tell me
is not untypical for us vintage models.

We are not unattractive
with our custom-painted exteriors
mag-wheel stilettos and Gucci lamps,
though the gray rust
keeps coming through
no matter how often we L’Oreal it away
and the age spots and dents
don’t disappear
even though we change
the Oil of Olay.

My odometer remains hopeful,
though I have heard of models my age
going up in a blue cloud of cancer
or grinding to a halt mid-trip
with a seized-up heart.


Aging, specifically as it relates to writers, is the theme I'm tackling this month at promptings. Come and visit. But hang with me for the duration. Though there's a lot of depressing stuff about growing old, it does have a silver lining!