Something to Look Forward To - M. Laycock 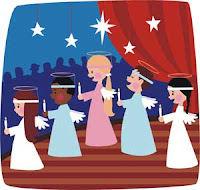 “See what you have to look forward to now?” the whisper in my ear came from a friend in the pew behind us and it made my smile widen. It was Dec. 10th and we were on our first outing with our new baby. She was only 10 days old, but we braved the frigid Yukon winter to attend the Christmas pageant at a small mission church.
I knew the service wouldn’t be a grand production. The church was just a hall, tiny and dilapidated. The Carols were sung a cappella, without a pianist to help keep us in tune. The pageant consisted of six or seven children dressed in bathrobes, their heads in kitchen-towel wraps. The backdrop was made of cardboard stars covered in tinfoil.
But I was seeing everything attached to Christmas in a new way. The tinfoil stars glittered more brightly than a chandelier. The carols were as harmonious as though sung by angels. And the children... ah, the children made the story live! I was bursting with thankfulness. I had just been given the desire of my heart, the precious gift of a child of my own.
We had been told it wouldn’t happen, and after five years without conceiving a child, my husband and I tried to resign ourselves to that reality. I took great pains to hide the deep sadness I found almost unbearable. No one knew how much I wanted a baby, but the clues were there. I was angry much of the time. Convinced God was punishing me, I hated Him. The bitterness poured into all aspects of my life.
Until the day God laughed.
It was on the road to Mayo, Yukon. I was going to visit a friend, determined not to think about God or religion or any of the baffling questions my husband kept bringing up. But no matter what I tried, my mind would not rest. The question of God’s existence and what he had to do with me would not go away. In desperation, I pulled my vehicle into a lookout point above the Stewart River.
The beautiful river valley stretched out below, but I barely saw it. In turmoil, I challenged God to do something to prove He was there. Then I realized how foolish I was, talking to a God I did not really believe existed. At that point something happened which I have never been able to describe adequately. I “heard” laughter, like a grandfather chuckling, and the words, “Yes, but I love you anyway.”
None of this was audible, yet it was real. I thought I was going insane. The turmoil had finally pushed me over the edge and now I was hearing voices. I stomped on the gas pedal of my truck, turned the radio up as loud as it would go, and fled.
My visit with my friend turned out to be more discussion of spiritual things, but by the time I returned home I was determined not to pursue Christianity. Besides, I had something else on my mind. I had been suffering from a strange flu. On about the seventh day of this “flu”, the realization I was in fact pregnant flooded over me like warm rain. With it came a thunderbolt of truth. This was the “something” I had challenged God to do. The child growing in my womb was His answer, the proof of His love. He gave me the desire of my heart. She was born Nov. 30, 1982.
“See what you have to look forward to now?” Oh yes, I saw. I saw a future filled with the knowledge there is peace without measure, grace without limit and love without conditions. I saw a future suddenly bright because I believe the Christmas story. A tiny baby, whose sole purpose was to die for me and all others, was born in Bethlehem. I saw the reality that the Christ is still intimately involved in our lives here on earth. Though the church may be just a hall, the music less than perfect, and the costumes homemade, the story is exquisite.

The story is true!
Marcia Laycock is the winner of the Best New Canadian Author Award for her novel, One Smooth Stone. Visit Marcia's website - www.vinemarc.com