I feel blessed to live in the beautiful province of Alberta. Often our family vacations are spent in other provinces or south of the border. This summer we were able to explore three areas of Alberta which our children had never seen: Jasper National Park, Banff National Park, and the Eastern Irrigation District (Brooks area). 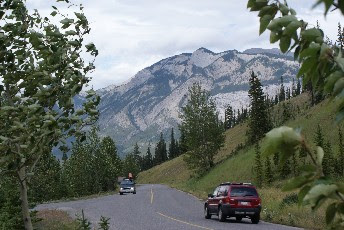 It's hard to describe the majesty and vastness of the Canadian Rocky Mountains. One lady cyclist I spoke with told me she has never seen such incredible beauty.  It is even difficult for a camera lens to capture the mountains, but that didn't keep me from trying!

We took advantage of a promotion from Brewsters, which allowed us to get a free child's ticket for each adult ticket. Our first adventure was a ride onto the glacier at the Columbia Icefields. The bus goes down a 32 degree slope to reach the glacier. A snow plow clears the road three times a day to keep it open for the buses. At the end of the tourist season, it only takes a day or so for the glacier to reclaim the road.

As we drove towards Brooks, we noticed many irrigation systems in use. I was startled to discover there are no natural water springs in this area. Every farm, city, town, business, etc. receives water from the Bow River through the Eastern Irrigation District infrastructure of pipes. (They have more pipelines than roads in this area!) The EID was first granted a license for water in 1910. Today they use the same amount of water per year that they used in 1910, but they are able to service three times the land area due to more efficient irrigation systems. Dinosaur Provincial Park is also in the EID. They have many interesting and educational experiences for families and individuals. This park is two hours south of Drumheller and has a similar land structure with fossil beds.