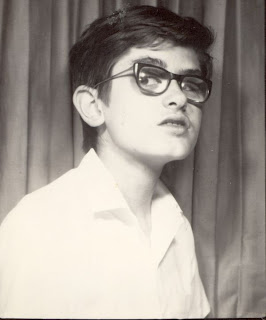 No matter how good we think we are, we still have our sinful nature to contend with. We humans are skilled at making up excuses to justify our crimes, yet God sees through them all. Though David Bowie isn't a Christian, his song, "God Knows I'm Good," hits the nail on the head when it comes to how we figure the Lord will cut us a break when we sin. You can hear the song by clicking here.

I presumed I was basically a good boy back in 1968. Being at a distant institution for blind children, I began to chafe at my fifty-cent weekly allowance. I felt it was unfair that my parents didn't send me extra spending money and the supervisors at Jericho Hill School wouldn't spare an extra dime either.

Once or twice a week, the supervisors took us to a nearby grocery store run by an oriental gentleman. While wandering the isles, I noticed that the cake topping decorations were in a spot where the man couldn't see them from the till. "He'll never miss it if I took some," I thought as I pocketed a few while he was busy with a customer. I felt nervous as I walked out but nobody stopped me.

On subsequent trips, I grew bolder. I came to believe that I had a right to those treats, being so far from home and all. One evening, a package of chocolate sprinkles fell out of my pants pocket as I was about to leave the shop. The owner said nothing but his look spoke volumes. I sheepishly put back the package and never stole anything from a store to this day.

James 1:13-15 (B.B.E.) says, "Let no man say when he is tested, 'I am tested by God;' for it is not possible for God to be tested by evil, and he himself puts no man to such a test: But every man is tested when he is turned out of the right way by the attraction of his desire. Then when its time comes, desire gives birth to sin; and sin, when it is of full growth, gives birth to death." This is exactly how I became a shoplifter. Thanks to our heavenly Father, he forgave me when I gave my life to Christ a year later.