Will We Meet Our Pets in Heaven? - Bruce Atchison 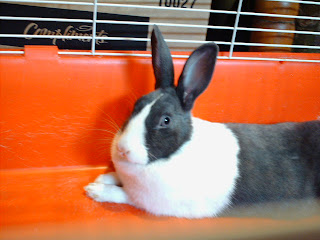 As much as I wish I could hug and stroke my beloved departed rabbits again, we won't be reunited with our pets. Why? The Bible doesn't teach that animals will be resurrected. Nor do they have the capability of sinning. Because of that, they aren't rewarded with heaven or punished with hell. As John MacArthur once explained, they're conscious but not self-conscious. God will populate the new earth with animals but none of our beloved companions will be raised from the dead.

Scripture has proven its veracity through historical evidence, the cohesiveness of its message, and corroborating archeological discoveries. Therefore, fanciful notions of eternity, such as the Rainbow Bridge, aren't real and only those who have surrendered their lives to Christ will be with him forever. The belief in animals being resurrected is based on wishful thinking and not biblical proof, as I point out in this excerpt from my upcoming How I Was Razed memoir.

Brother H's notion of being reunited with our pets is also unbiblical. Ecclesiastes 3:21 says, "Who knoweth the spirit of man that goeth upward, and the spirit of the beast that goeth downward to the earth?" Solomon wasn't doubting the assertion of human spirits and the descent of animal spirits but was pointing out that we can't see where they go. Ecclesiastes is based on a view of life from a physical standpoint. Even so, he did make a distinction between the two kinds of spirits and their final destinations. Since Christ died exclusively for humans, the only species on Earth created in God's image and capable of sinning, we are the only ones destined for resurrection. As much as I'd love to be reunited with my long-eared companions that I wrote about in When a Man Loves a Rabbit (Learning and Living With Bunnies), Scripture indirectly precludes that possibility.

I also wrote in Deliverance From Jericho (Six Years in a Blind School) about the time I foolishly gave our pet rabbit, Samantha, a cold bath and inadvertently killed her when I was twelve years old. Please click here for more information about these memoirs from my web page.