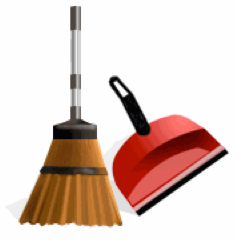 It all began the afternoon Arlene decided to file a few bills during the commercials in “American Justice.” When she couldn’t squeeze the water bill into the “Utilities” folder, she pulled the folder out. But with the bill inside, it wouldn’t fit back into the drawer.

She’d have to do something about this – maybe take out the Ts to Zs and transfer them to the second drawer, or pack the overflow files into a cardboard file box.

When she opened the other drawers, they too were full to bursting. And where was there room for a box? The floor and desk were already littered with stacks of papers, flyers, catalogues, phone books and slovenly mounds of Reader’s Digests and Guideposts. Jars of pens, paper clips, and other office supplies filled up the bookshelves, and a row of flashlights guarded the set of encyclopedias. Things were double-parked everywhere. The time had come for serious action. Besides, tackling this glut of paper would fill up the lonely hours. So that afternoon she turned off the TV,  cleared a spot on the desk, and began weeding papers from the top drawer.

She had never done anything like this before.  Record-keeping had always been Dave’s department. Now, she found, it was a tricky business. Did one need all these car receipts from the 60s, the statement showing one had paid one’s life insurance in 1982, and documents detailing Dave’s projected pension income year by year – especially now he was six months gone?

To complicate her decisions, she kept hearing his voice: “The minute it’s gone, you’ll need it,” and “The taxman cometh.”  Cometh for what?  To do an audit? She was sure many of these folders hadn’t been consulted in years. And wasn’t there some law the taxman could only go back in your records five years, or seven?

There was another thing. Jesus’ command to the rich young ruler had always fascinated her: “Go thy way, sell whatsoever thou hast and come ... follow me.”  Having the freedom to follow God with nothing to tie you down sounded impractical, yet exciting. She’d often felt the weight of the things they’d collected – especially when those things filled every available space. Here was her chance to escape just a little from the grip of “whatsoever thou hast” and experience a taste of the risk she heard in Jesus’ command. She decided to be ruthless in her culling.

She missed the six o’clock news and “Wheel of Fortune” to finish the drawer. When she was done all that remained in it were nearly empty folders, sagging like flab on a once-obese person. The sight of the plump yellow recycle bag made her feel good.

So good, in fact, the next day found her at the desk again missing “Judge Judy” to work on the second drawer, and the third, and the fourth. By then a recklessness had come over her. She decided to carry on through the rest of this room, the kitchen, indeed the whole house!

The job took a month. It became such an obsession she forgot all about turning on “Oprah” and lost track of what was happening on “Coronation Street.” When she closed her eyes at night she saw jars, plastic tubs, old clothes, shoes, books, magazines and bags and bags and bags.

But finally the day came when she had tidied the last closet. She resolved to finish the job by giving the house a final and thorough cleaning.

When she opened her cleaning supplies cabinet, though, she hardly recognized her meager supply caddy – but that’s right, she’d thrown out most of her solutions and powders in favor of the magic micro-cloth that was all the rage.

She went to put on her cleaning music – an old CD her kids had discarded a generation ago – but couldn’t find it anywhere either. Different music would have to suffice today. On channel twenty four she found Diane Bish playing a Bach concert and soon pipe organ Preludes, Fugues, and Toccatas were echoing through the house as she dusted, scrubbed, and polished.

When at last she stood to admire her efforts (favoring her aching knees as she’d had to wash the floor by hand because the mop too had disappeared), she had to admit, though the immaculate house did look as stark as the day after taking down Christmas decorations, it was wonderful – swept clean and put in order.

The next day she was turning on her computer to pay her overdue bills when the phone rang. It was a man from the trust company. He had an urgent question about Dave’s will.

“Just a minute,” she answered. She went to the file cabinet, opened the drawer, pulled out the folder marked “Wills” – but it was empty.

“Give me your number please, and I’ll get back to you,” she said to the trust company man and hung up, shaken. Had she perhaps been a tad too thorough? Oh well, there was bound to be a copy in their safety deposit box in the bank.

To get into that, though, she needed the combination. Good thing she knew where it was.

Or where it used to be. For she couldn’t find the combination or her internet log-in number for the bank, as it appeared she’d also trashed the book containing both of them. Dave’s old warnings began replaying in her head and her sense of satisfaction was replaced with misgiving. What had she done?