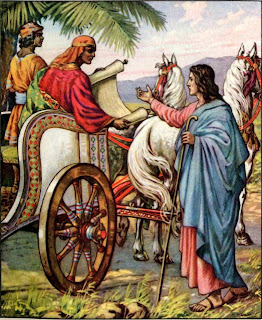 Now an angel of the Lord spoke to Philip saying, “Arise and go toward the South along the road which goes down from Jerusalem from Gaza...” (Acts 8:26)
Philip isn’t being asked to leave the Samaritan revival to go to on holidays. The passage above continues, “This is desert.”

But we hear no demur on Philip’s part. No, “But I'm being used here ..." Just, "So he arose and went," without any further explanation from the angel about why or exactly where.

He gets that when he reaches the desert and sees the chariot with its Ethiopian passenger. Then the Spirit whispers, “Go near and overtake this chariot.”

From that point Philip is on his own again in that he has to run to catch up, then use his intellect, experience and common sense to figure out what the man’s spiritual need is and how to address it.

But from God’s point of view the situation is puzzle pieces fitting together. This official of Candace’s court is interested in spiritual things, has just made a trip to Jerusalem to worship God and is engrossed in and mulling over the prophetic writings of Isaiah. Philip is the perfect one to explain things to him. Even more important, he's God's 'yes-man'!

Philip takes a sum of the situation and wastes no time explaining the Gospel to the Ethiopian, who accepts it to the extent of requesting baptism at the sight of the first sizable puddle.

Then Philip’s work with him is done. After the baptism “...the Spirit of the Lord caught Philip away, so the eunuch saw him no more and he went on his way rejoicing.”

I’ll bet. And I would think Philip felt the same joyful. Because if there is any feeling on earth as wonderful as realizing that the God of the universe cares enough about little me to answer the question of my heart, it’s when God uses me to be part of that answer – whether to many, or one.

Such unselfconscious asking (and getting), such care-less obeying (knowing that sometimes obeying means not being whisked away; sometimes it means sticking with the already-given assignment and faithfully doing the day’s duties without any visible sign that heaven is involved) is, I think, part of what Jesus meant when He said, “My yoke is easy and my burden is light.” (Matthew 11:30)