For this month's post I chose to veer off topic slightly although my post still pertains to times of feeling like you've dried up be it physically, emotionally, spiritually or creatively. It comes from my personal blog that I share at gloriaguest@wordpress.com

I recently read an excerpt from a book entitled, Spiritual Rhythm by Mark Buchanan which talked about the verse in Eccl. 3:1, “For everything there is a season,” making the point that while summer is for growing and enjoying the sun, winter brings dormancy and waiting. And so it is with our lives. We are not always in the happy spring or thriving summer time of our lives.

Sometimes, just as snow covers the ground, shrouding all signs of growth beneath it, we can find our hearts in the middle of winter. I’ve heard statistics that say there are more people who visit psychologists during the month of January than any other month of the year. Of course there are ready conclusions for this such as facing the realities of overspending during the holidays or relational strife that also often occurs during the holidays. There is also the aptly named disorder SAD or Seasonal Affective Disorder which can cause some people to feel blue from a lack of light; no big surprise when at this time of year in Canada it seems the sun has no sooner risen, then it is setting again.

However for others, it can be more daunting than the above mentioned reasons. Winter has come and settled into their hearts with its cold, icy fingers and threatens to never let go. Spring appears to be nowhere in their future.

I have experienced my own times in the midst of winters’ grip. The first time, the promise of Spring was actually in the air; the ice was even breaking up on the Athabasca River that ran through my hometown in Northern Alberta, sending huge chunks flowing along it’s quick current, a sight that usually exhilarated me. However on this day, we were burying my mother who had died far too young at the age of 48 from cancer. I was sure the suns rays would never quite reach my aching heart again.

However slowly, warmth did penetrate my heart. God sent two angels in the form of my own small children whose laughter and smiles were infectious and brought life into my days. I discovered that life went on and even though things would never be the same or how I wished it could be, it could still be good. Winter had left and it was the springtime of my life. 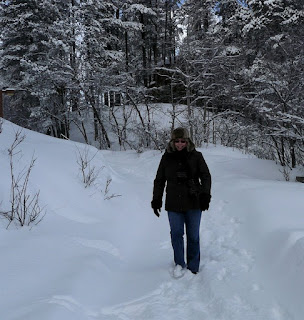 I wish I could say that it stayed that way. However our little family went on to experience other hardships such as the loss of our way of life when we left our home on the farm to seek other employment…a time of grieving for sure. And then just when life was settling into a routine again in a new home in a new town, winter struck my life with a vengeance when we experienced the devastating loss of my younger sister to suicide. This time it felt like winter had come with a full force blast and was never leaving. Paradoxically it was a beautiful, warm, sunny June day when she died, but for me it may as well have been the middle of a January blizzard.

I write about these things not because I find it easy but because I know that there are some people reading this who are experiencing their own dark days of winter. Over the years I’ve read many things about this difficult season of life, some more helpful than others. I think Buchanan in his book Spiritual Rhythm, in writing about helping someone through the deep winter seasons of their life, said it better than most when he stated, “Some things are done only in winter. And some things are never done in winter. And that’s just the way it is.” By this, I believe he is saying that winter brings with it, it’s own rhythm, its own pace of moving through.
At my mothers’ funeral we played her favorite song, The Rose by Amanda McBroom a beautiful and meaningful song that describes a seed lying beneath the frozen snow of winter but in the spring the sun shines down and that cold, dormant seed becomes.... The Rose.

Thank you for stopping by for a moment…Gloria

Email ThisBlogThis!Share to TwitterShare to FacebookShare to Pinterest
Labels: Gloria Guest, gloriaguest@wordpress.com, the season of winter