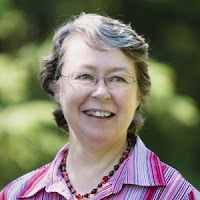 Some people seem to have an underlying belief that writing about what is painful and ugly in life is somehow denying the goodness of God.

I disagree. We do not write about the ugly, the dark things of despair, in order to glorify them, nor to question God, but in order to put them in their place and to recognize that there is something more, there is redemption of all that is ugly and evil in this world, because of what happened on a cross at the base of a hill in a tiny country then called Palestine.

As a pottery student many years ago I learned that you can’t use just any old clay to make pottery. It has to be the right consistency, the right combination of elements. Some clay is too fine. When it’s thrown on a wheel it won’t stand up, won’t keep its shape, won’t survive the heat of the kiln, so a substance called grog is added. Grog is clay that has been previously fired in the kiln, then ground into fine particles. Grog sometimes hurts. As you throw a pot on the wheel you can feel it scraping your hands. Sometimes it even makes them bleed.

Our writing needs grog – that stuff that has been ground up inside us as we struggle. We must put the stuff of real life into it, or it won’t hold up. It won’t do what it is intended to do.

I wrote this short devotional for a local paper some time ago. I called it Hard Questions:

It seemed fitting that the sky hung heavy and low. It seemed right that the wind was bitter, howling with the fierce shriek of winter around a tiny country cemetery. There was a very small hole in the ground and a very tiny casket to be put into it. It seemed appropriate that we all stood numbed by the cold of that day.

A friend of mine once wrote a poem about Adam, Eve and God in the Garden of Eden. It was a good poem, well constructed with a strong rhythm and powerful images. One of those images often comes to mind when bad things happen to good people. It’s an image of God curled into a fetal position, and the wailing sound of His weeping.

Sometimes we ask hard questions. Why did that baby have to die, God? Why is my friend suffering with a painful cancer? Why are those people in Africa starving? We don’t usually get a good answer to those questions. They leave us numb and they leave us wondering if God is there.

But then there is that image and that sound. In my friend’s poem God mourned the first disobedience, the first break in His relationship with the creatures He put on the earth.
The picture my friend painted with his words was of a God who cares, a God who feels our pain, a God who mourns with us, especially at the graves of tiny babies.

He is also a God who will answer. He is a God who acted to redeem all that was broken in our world. He is a God who continues to do so. The redemption was accomplished on the cross of Calvary, but it is not yet complete. As the writer of the book of Hebrews said, God “… waits for his enemies to be made his footstool, because by one sacrifice he has made perfect forever those who are being made holy” (Hebrews 10:13).

The process is sometimes painful, but the world will one day be made entirely new, entirely redeemed. The scriptures talk about creation groaning as we wait for that day. The groans do not fall on deaf ears, nor will they remain unanswered forever. One day that tiny baby will rise, whole and perfect as God intended him to be.

God’s plan is unfolding. What then, should we do in those times when we groan and feel there is no answer? Again, scripture tells us – “To act justly, to love mercy and to walk humbly with your God” (Micah 6:8).

The Sunday after that piece appeared in print, the father of that baby approached me in the lobby of our church. He said he was in a local restaurant when he read Hard Questions. He said it wasn’t long before tears were streaming down his face. I held my breath as he described what he was feeling. Many things flew through my mind. Was he angry with me? Should I have written and published that piece when it exposed not only my pain, but his?

Then, with tears brimming in his eyes he said, “Thank you. It was part of the healing. Thank you for writing it.”

Madeleine L’Engle has said - “The discipline of creation, be it to paint, compose, write, is an effort toward wholeness.”

This is our responsibility – to struggle toward that wholeness in our lives and in our work; to take our work deeper, to make sure it has enough grog in it to stand, and perhaps even to heal.