How the Natal Star was Born by Violet Nesdoly 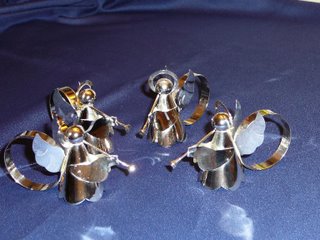 The Son vanishes just after I am sent
to the Galilean virgin
and heaven isn’t the same.
Gone the laughter, mischief, hijinks.
Music replaced by silence
all monochromatic, sober
like the life of the party
has left
and we don’t have the will
to keep partying or to go home.

The Almighty’s been moody since then
broods like never before
over calendars and seasons,
looks down a lot, mostly toward Nazareth
at this blossoming virgin-no-more
and her earthmate.

All the hosts of heaven stop their chatter,
crowd behind Abraham, Isaac, Jacob, David
peering over the balcony
focusing on a dark building
near a sign that blinks “Sorry - No Vacancy”
It’s so quiet
you can hear the stars hum.

The Almighty shouts
tosses His glory
flings His radiance
laughs His magnificence
and then starts handing out
cig–, no trumpets
to every angel within arm’s reach.
“Go tell somebody, anybody
find someone who is awake
or wake them up!”

After they’ve left He asks for the bubbly
shakes it up good
pops the cork
sprays it all over heaven.

This poem has done well for me, winning an Inscribe Contest prize a few years ago and, last year, a Pacific Theatre competition with the prize that it was read at last year's "Christmas Presence," and hubby and I got season tickets for the remainder of the PT's 2005/6 performances. So submit that poetry – you never know!